For seven years, Mayo Methot was married to stage and screen actor Humphrey Bogart during the peak of his career. Considered by some as Hollywood’s greatest leading man, a bookshelf of biographies prove his lasting ‘star power.’

Less recognized is Mayo Methot’s own stardom on both the Broadway stage and in film. Along with her colorful, high-profile behavior and marriage to one of Hollywood’s biggest performers, Mayo Methot’s life is replete with talent, drama, celebrity, high stakes and controversy—all ingredients for a fascinating book. 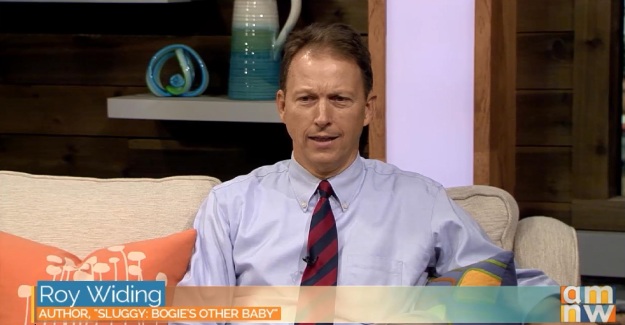 ‘Sluggy’ intersects with interesting and conflicted celebrities during a special time known as Hollywood’s ‘Golden Age.’ Anyone curious about their seven year roller-coaster Hollywood marriage will find ‘Sluggy’ a revealing view into the mercurial relationship that even movie ‘tough guy’ Humphrey Bogart couldn’t control. Humphrey Bogart’s fourth wife was sometimes called ‘Bogie’s Baby.’ Yet years before Bacall was Bogie’s other baby, Mayo Methot. Buy ‘Sluggy: Bogie’s Other Baby’ here or on the link below.

‘Whispers From The Tomb’
by Roy Widing
Non-Fiction

The Rae Room is a stunning tomb in Portland, Oregon unlocked once a year for public viewing.

Mystery, History, Romance…And All True
This mystifying final resting place of a lumber baron and his wife features exquisite artistry with remarkable attention to detail.  The Rae Room is also a link to an intriguing true story of mystery, history, romance…and all true.

Roy Widing’s non-fiction book ‘Whispers From The Tomb’ begins with the accidental discovery of a magnificent tomb unlocked for the public only once a year.  Inside are two enormous marble sarcophagi standing side-by-side for more than half a century.

This  launches a quest to know more. Who are these people and why was this lavish structure built?  We learn the deceased man is a wealthy businessman who immigrates to the United States in his youth. But little is known about the mysterious woman next to him. Digging back in time yields tantalizing clues.

Almost worthy of a spy novel, we learn the man’s body is exhumed from his initial burial plot and spirited to his final resting place inside the opulent tomb. Whispers From The Tomb next uncovers multiple headline-making courtroom dramas. Each involves the deceased wealthy man, his massive estate, those expecting to gain from it and the mysterious woman resting beside him. Read ‘Whispers From The Tomb.’ It’s history, mystery, romance…and all true!

Other TV Interviews About This Book

Whispers From The Tomb is now available in audiobook format. For more information about this story and book, visit WhispersFromTheTomb.com.

November 22, 1963 is a day that forever changed the course of history. Adults of the time remember where they were and what they were doing when President John F. Kennedy was assassinated.

Now more than half a century later, many Americans continue to believe there was a conspiracy to kill President Kennedy and doubt suspected assassin Lee Harvey Oswald acted alone. In his novel 11-22-1963, author Roy Widing shows how the mysterious murder of a president may still be solved using yet-unexamined evidence.

The Hunt For New Evidence
New evidence on President Kennedy’s assassination continues to surface nearly a half century after the event. One reason is because thousands were on hand to greet President Kennedy in Dallas on his November, 1963 visit.  Another reason is that many who came to see the president brought cameras with them.  As a result, a stream of freshly-discovered movies and photos are still coming out.

(1). In 2007, the George Jefferies film was released after sitting in a drawer for decades.

(2). That same year, still another home movie was found, with images of President Kennedy near Dealey Plaza on November 22, 1963.  View what is now known as the Bob Yeargan film here and read about it here.

(3). Then in 2011, the Roy Bottello film was released after sitting in a drawer for decades.

These three movies had never before been viewed by the public.

Official Beckons Film Holders To Come Forward
Former Sixth Floor Museum official Mr. Gary Mack remarked about the discovery of one film taken during President Kennedy’s last night alive: “When I look at these films, I see people in the background with cameras and I know those pictures from that angle have not surfaced yet…and I wonder where are these pictures?  Why have these people not come forward?”

Given this continued stream of new evidence, is there more to be found?  And how might this help solve the mysterious JFK assassination?

Some accounts estimate 150,000 or more people lining the route of President Kennedy’s motorcade. Mr. Mack once encouraged anyone with film or photographs of the event to come forward.

The new book 11-22-1963 shows how the murder of a sitting president may still be solved using new evidence.  For more information on this exciting read, visit 11-22-1963.com and buy it here.

The United States House Select Subcommittee on Assassinations came to the conclusion that President Kennedy was ‘…probably assassinated as a result of a conspiracy.’

The Art of War for Home Sellers
Non-Fiction

Selling your home doesn’t have to be a losing battle. Get ‘The Art of War for Home Sellers’ here.

Now Available on Amazon. Click here or on above Image to Purchase ‘The Art of War for Home Sellers’

Whispers From The Tomb – Audiobook Trailer

‘Whispers From The Tomb’ – Book Trailer

Waltz With Me – Song Preview

Back To Me – Song Preview